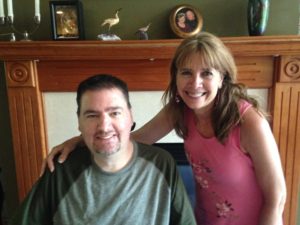 “I consider myself the luckiest man on the face of the earth,” said Lou Gehrig in his famous speech 77 years ago. It’s a rare person who would call themselves “lucky” when living with ALS, a degenerative fatal disease, but Lou Gehrig recognized that he was loved, and for that, he felt lucky.

Lou Gehrig set the example for others to remain courageous and optimistic while living with ALS.  Having lost a friend to ALS myself, in 2010, I’m constantly reminded of the enormous strength of character required from those who have this disease, in spite of the physical strength which slowly fades. Similar to how someone who is blind has heightened senses to help compensate, my experience is that those who have ALS, rely on a deeper inner strength that spurs them on to accomplish great things and to fight for a cure.

Scott Marble is one of those people proudly “fighting ALS” as he states as his profession on Facebook.

Marble started as an entry-level staff accountant at NCS (later acquired by Pearson) 24 years ago. “I am proud of the accomplishments and experiences I had at work. I was able to celebrate my 20th anniversary before leaving due to ALS. I was a Vice President of the Assessments and Information group when I left. I was fortunate to have many opportunities working in different divisions of the company and meet so many outstanding people,” says Marble.

But ALS hasn’t stopped Scott Marble from continuing to make a difference in the world. In May, 2016, he, along with his husband, Shaun Olson, participated in the 19th Annual ALS Advocacy Day event in Washington DC. Marble and Olson, from Brooklyn Park, Minnesota, were among the 23 advocates from the ALS Association, MN/ND/SD Chapter to meet with legislators about issues impacting those living with ALS.

“Sharing their stories has a huge impact,” said the legislators and attendees at the event. “Their stories are what make things happen here at the capital and make change happen for the entire ALS community.” People who had only known each other through social media were able to meet face-to-face for the first time and find a sense of community in their shared experiences as caregivers and people living with ALS and fighting for a cure.

Being part of this community undoubtedly brings an understanding, a common passion to make a difference, an urgency for a cure, and the grief that comes when lives are lost.

A recent Facebook post from Scott reads, “Last night there was an online ALS candlelight vigil. Two Facebook friends, who both inspired me, passed away from ALS this last month. This light is for Nick Grillo and Dave Adox, may you rest in peace. June seems darker without you, my friends.”

I’m honored to have had the opportunity to meet Scott and Shaun personally a few weeks ago. They welcomed me into their beautiful home and generously allowed me to interview Scott for this post. Scott’s health has remained stable for the past year, and he attributes that to his positive attitude and the love he receives from Shaun and other friends and family. Scott and Shaun are active in the community and of course, are advocates for finding a cure for ALS. They shared stories of their recent visit to Wisconsin and of their upcoming plan for hosting a neighborhood “Walking Dead” premier night

“Like everybody else, I never thought ALS would be a part of my life. However, it has been with me now for 4 years. Before ALS, I was very focused on my career. I received a Bachelor degree in Accounting and a Master’s degree in Corporate Finance. I worked my way up the ladder from staff accountant to vice president of finance. After being diagnosed with ALS, at the age of 43, I learned this was not my area of most importance.

I’m lucky that I have a wonderful husband, Shaun Olson, who has been with me over 20 years, and blessed with a loving family and many friends. I’ve taken this time to get closer to others and let them know what they mean to me. I may no longer go jogging, but with the help of medical equipment, I can still enjoy life. This disease is a hard one. Shaun and I find strength in using our experience with ALS to help others. This is why we are here advocating and asking for your help.”

I’m proud to be participating on Scott’s team, Marble’s Marvels, in the Minneapolis area Walk to Defeat ALS on September 17th, 2016.