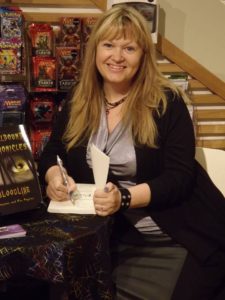 When Suzanne Maguire Phillips was told she only had 2-5 years to live, she was, of course, devastated. She was 36 years old with two sons under the age of 10, and what saddened her the most was the thought that it was unlikely she would live to see her sons grow to adulthood, get married, or have children of their own. Suzanne, who lives in the UK had been diagnosed with MND or “Motor Neuron Disease.”

Though called MND in the UK, this fatal and debilitating disease is known as ALS (Amyotrophic Lateral Disease) in the United States, though perhaps even more familiar in the US is the name, “Lou Gehrig’s disease.”

“I decided to be the best mother I could be at that moment in time, to remain positive and to write a book to leave my sons as a comfort and a legacy.”

That was 14 years ago. Suzanne enlisted the help of her mother, Eve Maguire, a published author herself, who helped create the Spellbound Chronicles. After many rewrites, the first book was published with the intention of raising money for MND/ALS Research.  Phillips didn’t stop there, but wrote a sequel and has plans for a third book to complete the trilogy.

Like many others, Suzanne attributes her relative longevity to keeping a positive attitude and surrounding herself with supportive people.

“It has to be partially, my family’s support, the amazing medical people working tirelessly to help us and a positive mind. I do have my down moments, believe me, but not for long. I surround myself with uplifting company, films and my writing where anything is possible in my stories. And to top it all, my love of writing children’s books with my mother, is raising money from sales for MND/ALS Research. A win-win position in my eyes.”

Suzanne is excited about ALS Never Surrender’s mission who has earned her “complete respect.”  “We’re all rooting for the same outcome,” she says, “a cure.”